I recently had to redesign my business card and decided to take a step back and think about the different functions it serves at different times. What resulted was my new mullet cards: business in the front, party in the back. 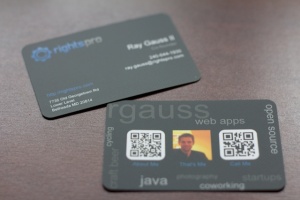 A business card can be much more than just a means to contact you at a later time.

At networking events I notice that people often jump to the address when handed a business card in order to strike up a conversation about people or places they know near there.  There’s a good chance we have a lot more in common than that so I threw several work and personal interests in a sort of thin word cloud.  Maybe they’re an avid cyclist, maybe they’ve just started coworking, or maybe they want to blow off this networking event and go get a good beer.

Who the hell was this and why do I have their card?

If I don’t process (I use CardMunch) the cards I’ve collected at an event with 24 hrs (which I usually do) I often can’t place a person by their name or company alone if I didn’t have more than a brief conversation with them.  My interests might help someone recall who handed them the card, but a face will almost certainly do the trick.  Realtors usually have a headshot on their cards, why shouldn’t I?

QR codes are meant to ease entry and access for mobile devices.  Often people put all of their contact info in one QR code in something like a vCard format, which can work, but when you try to put all of your information in a single code it can greatly affect the ability of QR readers recognize it, especially in bad lighting.  Even if the vCard does get captured it most often gets neatly tucked away in their address book, never to be viewed again.

I chose instead to go with two simple codes; one that is the URL for my About Me page, and one that is my Google Voice number.  If I’m telling someone how cool Untappd is or discussing cycling routes they can quickly snap the About Me QR code I just handed them and get right to my Untappd or RunKeeper profiles from there.  If weeks later they find my card and decide they want to chat they can snap the Call Me code which is only the phone number so most readers will just ask for a quick confirmation then dial directly, no hunting through address books.

Don’t buck the trend too much

The front is pretty much your traditional card with basic contact info.  Obviously not everyone knows what a QR code is, let alone how to read them, or is going to want to look at my ugly mug. Business in the front.

A shout out to the printers

I used MOO.  I was very impressed with the ease of submitting and verifying, speed of printing and shipping, and quality of the final product.  They did a fantastic job and I highly recommend them.

This was a good first pass, I’ll probably modify them a bit for the next round.  Do you have any suggestions?

Director of Innovation at Easy Dynamics.